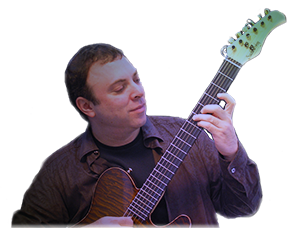 Mark Chosak, a native of Los Angeles, has been playing guitar and performing since the age of 10. Upon entering college, he began his serious study of music, completing a B.A. degree in music at UCLA (winning the Atwater Kent and Gil Rodin awards for guitar performance) and performing with such jazz-greats as: George Cables, Poncho Sanchez, Buddy Collette and Bobby Shew; and then continuing his studies at the Grove School of Music, where he graduated with honors. Throughout his career, Mark has performed and recorded with various artists for live concerts, film, television and sound recordings. He is active in Los Angeles and San Diego both as a session guitarist and as a composer/producer.

Mark was featured as the lead guitarist for “A Night With Janis Joplin”, a fantastic and fun retrospective of her life with an on-stage band and powerful singers.  The Broadway show has been touring nationally to sold-out audiences.

In addition to live performances, his guitar playing can be heard in many television shows, video games and sound recordings.